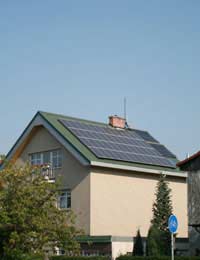 Established in 1997 in the heart of Yorkshire, Ploughcroft Renewables started its days as a construction and roofing company. Founded by father and son, Bill and Chris Hopkins, the duo set up business with quality and satisfaction at the centre of their ethic. As the years past, hard work soon paid off for Bill and Chris as in 2002, the company was awarded Quality Standards ISO 9001 certification as well as officially becoming an official ‘Investor in People’. This investment was to continue, as two years later in 2004, Chris created an official Ploughcroft training school to provide Ploughcroft’s skill, knowledge and passion to people coming into the roofing and renewable energy industry so that they could one day start their own business.

As the training centre grew, it was soon noted for its astonishing teaching quality and in 2005, was awarded full accreditation by the awards body, City & Guilds. Thanks to the work and development that Chris put into the training centre, RooferMan was then established in the same year. RooferMan is a business opportunity for roofers going through the Ploughcroft NVQ training centre so that they can stand on their own feet and set themselves up their local areas. Since 2005, RooferMan has been awarded the National Award Winner for Best Place to work in Construction and the Construction Excellence Award of 2008, along with a string of other accreditations and certificates.

Most are seemingly unaware that photovoltaic panels give off zero emissions whatsoever and that they also work when it is cloudy, which matters not anyway because Britain still receives 60% of the sunlight that is received on the equator. Considering this, Solar and Renewable energy became the new objective and pushed Ploughcroft forward into a new phase of its illustrious yet still surprisingly short career.

By 2008, Ploughcroft was already known for ‘leading the solar revolution’ and won contracts with three prestigious British companies that included Valliant, NPower and Plumb Centre. Around this time Chris was nicknamed ‘Solarman’, and is something that has never left him, becoming what is now viewed as a badge of honour. Since 2005, Ploughcroft have installed thousands of solar installations into people’s homes including both Photovoltaic and Solar Thermal Panels.

With Corgi and SME awards given in 2010, the company continued to grow, explore and maintain its award winning standards with the most exciting phase of business yet to come. Although this may sound exciting, it is news that is being discovered across the board with experts expecting an annual 8% rise in the demand for renewable energy until the year 2030. With that in mind, there has never been a better time to get into renewable energy.

In 2011, Chris stepped into the room most feared by business entrepreneurs around the country. Standing on ground where hundreds had been slain, Chris prepared to do battle with the Dragons of BBC2. After a solid pitch and a set of challenging questions from the dragons, Chris left the room victorious with a £120,000 combined investment from Leo Paphitis and Deborah Meaden. With a bright future now in front of the company, as well as a glittering past behind it, Ploughcroft Renewables is set for the echelons of the energy world.