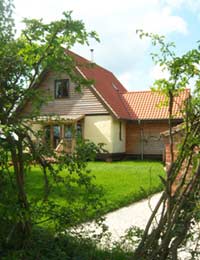 Carol Atkinson’s interest in straw construction arose during her studies for a Master’s degree in architecture at the Centre for Alternative Technology, Machynlleth – and she’s been putting theory into practice ever since. Originally setting out to add a straw bale cottage as part of a diversification of the family’s farm near the small Yorkshire town of Howden – planning delays first led her to make a cabin from straw, before finally going on to build the first two bedroom holiday cottage of its kind in Britain.

With three main objections raised to the cottage – the open countryside location, the lack of a bus route and the use of non-traditional materials – the cabin was built on a steel, twin-axle chassis, making it legally a caravan – and so falling within the definition of ‘temporary building’ status. Despite the obvious frustrations along the way, all the hard work has clearly paid off. The cabin itself has already established an enviable reputation as a tourist venue, while the experience gave everyone involved the confidence to tackle the larger job of building the cottage itself.

“It was mainly built by my son Sam, with me tagging along. My husband, youngest son and friends helped out for days here and there, but as the whole thing took 15 months, it’s safe to say that Sam did the bulk of the work,” Carol says.

That work began in earnest in 2008, with the foundations. Mindful of the ‘keep things dry’ maxim of straw construction – and the potential danger of future flooding on a site just five metres above sea level – it was decided to begin the first course of bales around one metre above ground, raised up by brick piers on concrete pads.

Although the use of concrete runs against Carol’s deliberately environmentally friendly approach to building, alternative options were not really appropriate, and by using pads, rather than strip or full raft foundations, the amount of concrete was significantly reduced – 50 and 75 per cent respectively.

There’s a lot of conflicting advice over bales. Some people prefer long straw, others short; some say use fresh bales as there has been less time for insects to take up residence, while others argue that newly baled straw will bring in loads of bugs from the field; some even suggest fumigation for each individual bale. There may never be a universally ‘right’ answer to these issues, but there’s nothing quite like empirical evidence – and in Carol’s experience, having built with both long and short straw, short is easier to handle, and the few tiny insects that do live in freshly-baled straw really aren’t much of a problem.

When it comes to bale selection, Carol sums it up in just three words:

Lifting the rafters into place

When the cabin was being built, a temporary roof of tarpaulins was used very successfully to protect the construction.

This time around, however, the larger area of bale walls – at 85 square metres, more than double – and larger roof of the cottage, coupled with less kind weather conditions proved much more of a challenge to the builders. Wind and rain were to batter the tarpaulins, ripping them to shreds and leaving the bales soaked.

There was nothing to do but dismantle the walls and re-build them. It took five days, and this time, rather than trying to ‘roof’ the whole structure, each wall was individually wrapped in its own tarpaulin cover to keep it dry, and the temporary internal floor adjusted to allow any rain falling onto it to run off without wetting the walls.

The cottage’s bale walls are load bearing, supporting the weight of the roof themselves, with the upper gables being filled in against a timber frame. To reduce the possibility of heat loss, any spaces need to be packed with either loose straw or a straw/clay mixture. Although it was clearly a somewhat labour intensive, arduous task, once completed, the final results gave the cottage a very solid finish – and plenty of thermal insulation.

Little does more to help ‘keep things dry’ than a good roof, and on a straw construction this is particularly important – ideally calling for an overhang of a good half-metre or more. Originally the intention had been to use thatch, and the cottage was designed with a steeply pitched, 50-degree roof to accommodate this material.

Unfortunately, in the end, budgetary limits meant that high cost of installing, maintaining and insuring it simply could not be met, so after considering all the options – and their embodied energy per annum cost too – locally produced Neopantiles were selected, and fixed firmly in place.

Lime render was used on the outside of the building – the first and second coats being ready-mix (three-parts sharp sand to one part lime putty), with the addition of locally-sourced chopped hemp, while the final thin top coat was a straight mix of lime putty and a finer sharp sand.

When the foundations were originally dug, the heavy, excavated clay was kept and eventually used to form the first coat of internal plaster, being rubbed well into the straw once any gaps between bales had been filled. Once dry, a thicker second coat – a ready-mix of clay, sand and chopped hemp – was applied to a depth of around 10mm, covering the straw completely, with hessian being worked in to help strengthen corners and avoid cracks around timbers or strapping.

Finally, a fine top skim of clay, and a coat of clay paint was used to provide the wall with a natural, breathable finish.

When the time eventually came to finish the first floor – one of the last jobs to be done – a dwindling budget meant that Warmcell was chosen as the cheapest green insulation material available, with the joists then covered with a 3mm covering of sheep’s wool, before the boards were re-laid and the final coverings added. For the upper floor, 15mm Celenit wood fibre boards, with a clay plaster and clay paint finish matching the internal walls, formed the ceilings, with 100mm of sheep’s wool between the joists to give sound insulation.

Sam – who had just completed his joinery apprenticeship before returning to begin work on the cottage – made the doors and windows himself.

As you might expect from a project so firmly rooted in environmental architecture, there’s no shortage of green design elements in the fixtures and fittings. The cottage’s plumbing arrangements include spray taps, an ES4 low flush toilet and a varyflush device, and hot water is provided by either an immersion heater fuelled by 100% renewable electricity from Good Energy or a centrally located Highlander 8 multi fuel stove – which also heats the cottage itself.

Drainage too has been carefully thought through to minimise environmental impact.

They say that experience is a great teacher, and with the work finally completed, there’s time to reflect on the lessons learnt along the way. One piece of advice Carol would give anyone thinking about a straw bale building project is to do an awful lot of research and use experienced advisors.

So, if it was being done again, what would they do differently? “Build the cottage a full two storeys, rather than have rooms in a steep roof,” says Carol – and she says she’d change the orientation too. They couldn’t put solar hot water on the thatched roof they originally intended to use, so orientation didn’t matter, but when it became clear that the thatch was going to be too expensive, they found they couldn’t simply alter the building’s original alignment.

“The planners wouldn’t let me change anything without going through the whole process all over again!” – and unsurprisingly, that wasn’t exactly a prospect that she relished.

Despite the red-tape irritations – and inevitable niggles that any building project suffers – the whole thing has been a great success, not least amongst the visitors who have come to stay in this unique holiday destination, if the comments on Carol’s website are anything to go by.

The straw building bug seems to have got into the family’s blood. After building the cottage in 2009, Carol’s son, Sam, began his own natural building company – and has been gainfully employed constructing straw bale buildings for a number of clients across the county.

So, the final question – would she do it again? “We do have plans for another,” Carol says.

Be warned; it seems that straw bale building can be addictive!